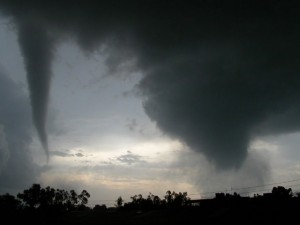 As reported by Alertnet.org (via Reuters):

NICOSIA, Sept 18 (Reuters) – A freak tornado ripped through Cyprus on Friday, injuring at least 11 people and wreaking havoc in the capital Nicosia, police said. The whirlwind accompanied by hammering rain tore off rooftops and uprooted trees which smashed into cars during rush hour traffic. Parts of the city were blocked by trees, while flying debris smashed shop windows and factory roofs collapsed. “It was unbelievable, the damage is huge. Thank God we had no victims,” said Panayiotis Kyprianou, mayor of the Nicosia suburb of Latsia. Police said those injured were hit either by flying debris or when trees crashed onto their vehicles. Their condition was not serious. Extreme weather conditions in Cyprus are very rare. (Writing by Michele Kambas; Editing by Sophie Hares)

So it appears our previous article was a bit inaccurate but not totally unfounded. We wish those who were injured in this natural disaster a speedy recovery and to those whose property was damaged, all the best in reclaiming and restoring from this loss.