Cyprusâ€™ R&B Ambassador DJ S7S, our very own â€œTop 20 R&B Chartâ€ contributor, is traveling around the world beginning his world tour in Cyprus! He will be launching his tour with a bang, and he will be playing in two clubs here in Cyprus! Both radio stations & promoters promise that it will be yet another night to remember!

The events will also feature 3 of the top urban DJs in Cyprus, 2 larger then life MCs and for the first time in Cyprus, the UKâ€™s 2008 Beatbox Finalist, the freshest talent from East London – Reeps One!
Nicosiaâ€™s show in Club Bling, will also feature two of Europeâ€™s finest with an amazing Bar Flaring Fire Show â€“ serving up our special â€œS7S Cocktail Drinksâ€ all night long â€¦

WIN VIP TICKETS AND A BOTTLE OF CHAMPAGNE FOR THIS EVENT WITH OnThisIsland.com !

Alternatively you can contact OnThisIsland.com to buy tickets for either of the events.

Here’s some info on the entertainers for the night:

The Multi Award Winning, Reigning Pioneer Champion has reached a level of recognition both on the Global circuit and on his home turf having played with the best in the industry from every corner of the world touring and hosting events from California, to London, Cyprus straight down to Dubai, quickly being established and acknowledged as one of the frontrunners on the circuit. 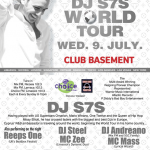 He is officially the first DJ in the Middle East, to have represented worldwide labels Warner Music International, Atlantic Records and P Diddyâ€™s Bad Boy Entertainment.

With numerous awards under his belt; he has built up his experience and confidence in some of the biggest venues in the UK and Europe, rocketing through the Urban scene.

Having played with US Superstars â€œOmarionâ€, â€œMario Winansâ€, â€œOne Twelveâ€, and the Queen of Hip Hop â€œMissy Elliottâ€, he has crossed faders with the biggest and best DJs in Europe.

Cyprusâ€™ R&B Ambassador is traveling around the World, beginning his tour in the city that never sleeps â€¦ Limassol!

DJ S7S also contributes his Lockdown Top 20 R’n’B Tracks to OnThisIsland.com each and every week. 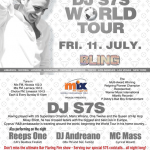 The promoters caught up with the UK Beatbox Finalist and asked him to tell them a little about him self and why beatboxing?

â€œMy name is Reeps one, Im from East London and started beatboxing around 5 years ago. Even though I am a fan of beatboxing covers which many beatboxers have mastered, what I enjoy is how beatboxing can be like playing any other instruments. Like a drummer thinks of his rhythms and flows, a beatboxer can go through the same exploration process if he can control the sounds. In saying this, I donâ€™t think thereâ€™s anything better then making a crowd of people that you have never met before go completely insane because you drop their favorite tune, but, for some reason I get something more out of playing with the crowd, slowly building up drops just like writing and producing a track , but performing it live.â€

Limassol Dynamic Duo, residents for many years at the Rumours Bar & the Basement Club. Im sure 95% of you know all about them!

The latest member of the SGC Family, his passion for Hip Hop R&B has sculpted his style behind the oneâ€™s & twoâ€™s, quickly being recognized and respected on the Urban circuit.

His radio show â€œSGC Rollout R&Bâ€ is aired each and every Tuesday 8-9pm Mix FM.

Dubbed â€œThe Lyrical Wizardâ€, his fresh and funky styles on the mic have turned him into one of Cyprusâ€™ fastest growing talents!