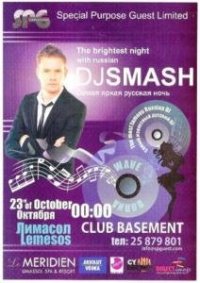 His first records were released in 1989 as Transphonic by defunct indie dance label Nu Groove Records founded by Karen and Frank Mendez along with R&B/Dance producers Burrell.

In 1992 he co-founded New Breed Records with Asia Love. As A&R and creative director of the imprint, he signed artists, compiled singles, EPs and full length releases. As as a producer/artist released over 30 of his own titles under various production aliases such as Jazz Not Jazz Massive, Yardboy, 2Much, JB, Cubian and Transphonix.

Event created by I love Cyprus on facebook
and submited by Iacovos Mylonas to OnThisIsland.com using the
Cyprus Events Application .