Warning: "continue" targeting switch is equivalent to "break". Did you mean to use "continue 2"? in /home/onthisis/public_html/www2/wp-content/plugins/liveblog/liveblog.php on line 914 Cypriot Artist : Anthi Pashi (Eurovision 2010 Nominee) 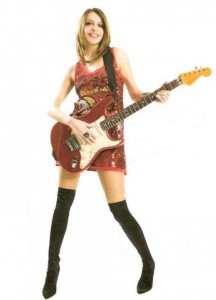 We caught up with Anthi Pashi who is the one of the finalists to represent Cyprus in Eurovision 2010, with her song ‘You Gotta Go’. On the 7th of February from 9PM, be sure to tune in to the show on PIK1 to vote for your choices. Anthi will be song number 6.

Anthi: I am currently 27, which I find a little difficult to admit sometimes :). I was born in the UK, Brighton in particular, but moved to Cyprus when I was just 6. I therefore consider Cyprus my home and really love it here. Although I must admit that I’m not a person that gets extremely attached to places. I like change and I’m very adaptive so even if I was to move, which I have considered in the past, it wouldn’t scare me. In fact it would only excite me. I studied in London for 4 years and really loved it there as well. London is one of my favourite places actually; it just has a fantastic vibe and loads to do. I try and visit at least once a year.

OTI : Now, you are submitting a song to represent Cyprus in this year’s Eurovision Song Competition. What kind of musical background have you got?

Anthi: Well I must admit that I’ve listened to different styles of music at different periods of my life. I enjoy the occasional pop music, I’ve listened to rock, Greek music and many more. But I would have to say that the style of music that best represents me is a combination of funk/soul and rock. I grew up listening to what my mother listened to, which back then was: Whitney Houston, Michael Jackson, Wham, Police; which is why my style of music is much closer to the English sound rather than the Greek sound.

OTI : Tell us a little more about this song in particular. What does it represent? What kind of image are your trying to portray?

Anthi: ‘You Gotta Go’ is a funky tune. I wrote it for my own personal reasons, I then decided to send it to compete for the Eurovision. I didn’t really think it would get through, mainly because I wouldn’t describe it as a Eurovision type of song. But I’m very glad PIK chose it and that it will be competing on the 7th of February. The image I want to portray is a musical one. Although this world is becoming a mainly visual one, I still think the music has to be good and this is what I’m counting on.

OTI : Who composed it? And who wrote the lyrics?

Anthi: I am both the composer and lyricist.

OTI : Very impressive! If you are chosen, can we expect a remarkable representation from you at the actual competition and its qualifying heats?

Anthi: There is no doubt that what you will see on the 7th of February in terms of performance, will only be a fraction of what can actually be done if chosen to represent Cyprus. Everything at this stage is done from my own budget, as is the case for every contestant, and with certain restrictions. You therefore can understand that if chosen, a lot of work will go into the song and the way it is presented in order to give Cyprus the best possible chance of getting into the final.

OTI : Ofcourse, soo where to after that?

Anthi: The Eurovision could potentially be a very good starting point for a young artist who wants to work towards a career in the music industry. It is also very difficult to predict how things could develop. I do think however that where there’s a will, there’s a way. I have certain projects in the pipeline right now which will be known when the time is right and sincerely hope something good comes out of them.

OTI : Who would you love to perform or collaborate with and why?

Anthi: This is a particularly difficult question because the music I would like to be involved with is English; something a little difficult in Cyprus and Greece.

OTI : So other than music, what are you currently up to?

Actually, music is all I’m up to at the moment. I am currently performing 3 times a week, working towards finalising everything for the Eurovision and working on some new tracks. I recently decided that I had to give music all of my attention if I was to say that I really gave my all. And so at this moment in time, music occupies 100% of my time; and I really wouldn’t want it any other way.

OTI : Thank you again for your time, and best of luck in the qualifiers! There you have it ladies and gentlemen… Anthi Pashi!