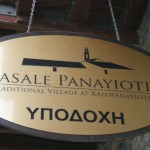 In case you were wondering, Panayiotis (from Casale Panayiotis) does not refer to a random Cypriot guy who lived in the village of Kalopanayiotis and had a thing for Spanish. No. The name actually, has a deep history. Here goes…

History. Somewhere in the 16th century, lived a Latin man, called Panayiotis. After the nearby villages burned down, all the survivors moved to the next nearby village for salvation and to rebuild their lives. Panayiotis, the gentleman he was, welcomed these people in his house and slowly helped them find their feet. Hence, the village grew and expanded and got the name of Kalopanayiotis, literally meaning, good Panayiotis. Casale, in Latin, means ‘the house of’ Panayiotis. As the guy from ‘My big fat greek wedding’ puts it, ‘So there you go’. And as the meerkat Alexandr Orlov concludes, ‘Simples!’.

Intro. During our warm welcome to this ‘house’ we were told the above story and met the ‘house’ manager, Mr Polis Ikonomou. Originally from Kalopanayiotis himself, the buildings of the complex belonged to his grandmother, which he renovated and turned to a tourist attraction. This attraction consists of 10 luxury village suites, a restaurant and a coffee shop. They overlook the cliff and lie above the river Setrahos and Agios Ioannis o Lambadistis church. Mr Ikonomou also informed us of his future plans to build an indoor and outdoor swimming pool as well as a wine cellar, which will be based into the mountain, and a library which will overlook the cliff as well. Casale Panayiotis is a very relaxing complex in a village which used to be inhabited by 1800 people and is now only inhabited by 88. The whole village mainly depends on Agrotourism. Let’s support this nice little village and keep the original, traditional culture and hospitality of the Cypriots alive. Unfortunately, this hospitality has been diluted within the expansion of the city centres. People barely know the name of their neighbours and rarely say good morning to anyone. As Mr Hetfield from Metallica puts it, ‘Sad but true’.

Anyway, as this is a food review, I should really start commenting on the food of the place.

Lost. We got slightly lost trying to find the actual restaurant as it was not in the actual Casale Panayiotis hotel. The receptionist kindly escorted us to the entrance of the restaurant where we were greeted by friendly waiters who took us to our table. 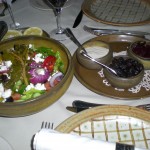 Food. A freshly made colourful, crunchy village salad, consisting of tri-coloured peppers, cucumber, tomato, lettuce, red onion,topped up with feta cheese and capers, lightly dressed (and yummy!) was waiting on our table  as well as small black Cypriot olives, tzatziki and beetroots. Everyone had a (wine) glass full of drinkable tap water, which, surprisingly enough did not stink of chlorine, and was actually really light and refreshing! (You are probably thinking, ‘I just read a whole sentence about tap water. Lovely.’ But seriously, you need to try this water!) The thing that impressed me the most were the plates. Ridiculous, I know. But they were handmade and each plate had a different design on it. Amazing idea!

Traditional koupepia (stuffed vine leaves with pork minced meat with rice and spices), eggplant with eggs, marinated traditional sausages (which my gran tried to politely put away in her handbag with a few tissues) and aubergines in tomato sauce arrived shortly. The best dish of the day was the grilled halloumi…dressed with honey! The huge vegetarian dish consisted of vegetarian koupepia, more stuffed aubergines in tomato sauce, some sort of kritharaki (type of rice) infused with lots of garlic and onions. Lamb kleftiko (slow cooked lamb in olive oil and herbs in a clay oven), chicken souvla (large chicken pieces cooked on the spit with herbs) and oven potatoes followed. Ttavas (potatoes and lots of onions) as well as pastitsio (thick pasta baked in the oven with pork minced meat and beshamel sauce) arrived in a deep small clay pot. To get rid of the meat and onion aftertaste, we ordered galatopourekko as a dessert. This is basically milk, corn flour and sugar (in the proportions of 1:1:1) on a thin puff pastry with a sweet syrup to top it up. Some of us ordered cappuccinos or traditional Cypriot (or Turkish?) coffee. 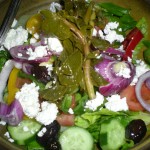 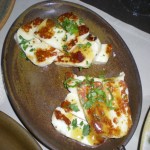 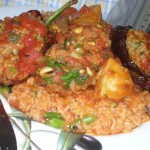 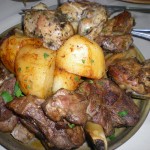 Traditions. Walking over the wobbly wooden bridge to get to our car which was parked outside the church, we were stopped by the Youth organisation of the village who kindly (or forcefully?) offered us loukoumades (warm dough balls in syrup) and insisted on taking some with us in the car. Typical Cypriots. Or is it? Not anymore. In the villages only. Perhaps.

After stuffing ourselves with the spherical mini-Heavens, we trotted to our cars only to notice a few local teenagers playing traditional Easter games outside the church. And I thought to myself, times like these I wished I lived in a village. People are friendly, they offer you food, they play traditional games and stick to their culture. This is what tourists must experience when visiting Cyprus. Not leave with the hostile thoughts of ‘I was ripped off at that kiosk. That man sold ice cream for a euro and pagoto (which is ice cream in Greek) for half the price! And a small bottle of water was 2 euros.’ 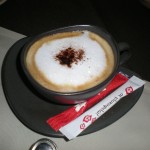 Anyway, the point I am desperately trying to make is, Cyprus tradition and culture is not dead – just well hidden. If you want to experience true Easter, you need to go to a village. If you are a tourist reading this, please visit www.bookcyprus.com and find the perfect location for your holiday.

‘I don’t know if you have cooked your Xmas tree on the spit, or decorated your Easter bunny, but Happy New Easter’ – famous Cypriot Easter text message, again, translated badly