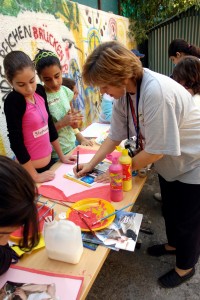 Quoted directly from the press release that arrived for me earlier.

The state, through the Ministry of Education and Culture, together with society and individual volunteering initiative, recognizing the important contribution of quality cinematic education in the formation of active citizens, capable of critical thinking, is actively supporting the annual International Childrenâ€™s Film Festival of Cyprus, being organized for the 5th consecutive year between the dates of November 15th to November 23rd 2008.
The official opening of the Festival has been set on Saturday, November 15th at Nicosiaâ€™s Pantheon and is expected to attract thousands of children, as well as their parents.

The Festival is unique in its kind in Cyprus, and has very clear, educational orientation, aiming to activate the critical thinking, observation and research skills of children through quality projections and workshops. These accumulated experiences will be integrated in the school program at a later stage, in order to maximize the positive effects of cinema, helping children to understand their social surroundings, as well as the social structure in which they are included.

Active field experts with intimate knowledge on multimedia education, academics, as well as a wide range of specializations contributing to the successful organization of the event, are taking part in this creative and persistent effort, which brings with it a considerable amount of preparation and responsibility. The Festival was established in Cyprus by a group of friends of quality cinema, aiming to provide the Cyprus public with a different perspective of cinema. It has evolved to a non-profit, non-government organization, based mainly on sponsorship and the selfless contribution of individuals.

The Festivalâ€™s organizing committee keeps expanding with people who selflessly offer their specialized knowledge. Anybody is welcome to contribute, in any sector they can. Those interested in doing so, should contact the Festivalâ€™s organizers onÂ  www.icffcy.org andÂ  info -at- icffcy -dot- org, or call 22 875 242.