This is an update to the story about the Turkish Actor who Confessed to murdering 10 Greek-Cypriot soldiers, including one Prisoner of War.

The Turkish actor was hiding all morning and when he was found, he claimed that he had just made a scenario in his revelation to see the response. 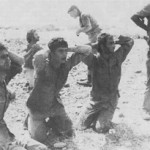 The Turkish actor Atila Olgkats spins his story after the uproar he had caused from his confession that he had killed 10 Greek-Cypriots, including a 19 year old captive, during the 1974 Turkish Invasion in Cyprus. Now he declares that it was all just a made up scenario such that he could see people’s reactions! According to valid sources, there is an attempt from the government to silence the stories for reasons of national security. After yesterdays uproar, Atila Olgkats refused to speak with journalists, even though they have been searching for him from yesterday morning. Not only from Cyprus and Greece, but there had been an intense journalistic interest from Turkey also. The Turkish actor had his mobile phone turned off for many hours to avoid calls from reporters. He eventually turned it back on after he had this statement to make : “ It was just a scenario, it was not real. I said it just to see the reactions”.

Was he lying? Is he being pressured to retract? Read more to find our more factors… [Now containing scenes from the original interview]

Wall of silence
According to valid sources the TV station Kanal Turk, where the Turkish actor had brought the original story to the light, has decided not to give the video of the interview to anybody. The request for the video have been numerous according to the same sources. Finally a decision had been made not to give too much attention  to the subject as it has been deemed dangerous for the countries interest.  Furthermore we have been informed that the producers of the show were surprised that the Turkish actor started to give an account about his experiences in Cyprus. They tried, in their own way, to stop him from revealing his story, however he wasn’t willing to do so. He started analyzing one by one the events. Those responsible for Kanal Turk, according to the same sources, now feel that they shouldn’t have aired the whole story, That is why they tried to not let the video leek to the public.

War Crimes
Turkish news outlets characterize the murder of the 19 year old prisoner as a ‘War Crime’ during the Turkish Invasion in 1974, which Atila Olgkats had confessed. Mehmet Gilmaz from the Turkish newspaper ‘Hürriyet’ declares he is shocked from the well known Turkish actor’s revelations, stating that if it is not a figment of his imagination then the road to prison will open for Olgkats. “I am not aware if there is prescription of crime of war” Gilmaz writes and adds that he can  imagine how the Greek- Cypriots may use these statements. Mrs Ashley Toots, a professor at Bilgi University in Turkey, states that there must be an examination to the fact that the actors confessions have come at a time where Olgkats new TV series ,which he stars in, will be aired soon under the name “Meadow of Wolves”. “Olgkats statement will surely increase the TV-viewings of the series in an intense atmosphere in Turkey which is dominated by the Ergkenekon affair”, she states.

The actor on ‘Radical’

He didn’t talk and I killed him

The Turkish actor was obviously shocked after the reactions which he had caused, and refused to speak with reporters and after his actions and he tried to disprove all that he had said at the Turkish TV channel. He did however speak to the ‘Radical’ newspaper , on Thursday evening, revealing the reason he killed the 19 year old prisoner. “ Our colonel had told us to make him speak. He didn’t talk. He spat in our face. Then our commanding officer ordered to kill him. And I was obliged to do so”. The Turkish actor even tried to change the original story  stating that he wasn’t a prisoner of the Turks and that the 19 year old had been chained by the Greek- Cypriots  such that he couldn’t leave! Furthermore the actor had been asked how he killed the other 9 Greek-Cypriots. The Turkish actor said that the war had ended and a clean up operation had started, however rebels continued to battle it out, and fights raged on even on the minefields. People died from both sides he added in those battles. “ The other 9, was it you that killed them?” he was asked by the ‘Radical’ reporter and Olgkats answered: “ That’s what I think, 35 years have passed since then”. Atila Olgkats said he couldn’t feel anything. “War isn’t a good thing. You forget that you are a human”, reported the Turkish actor, further saying that even whilst he talks, the horrifying scenes of war pass from his eyes. “Do you know what is even more tragic? That an artists had to do this, that it had been assigned to him to do such a thing”, says Atila Olgkats. He repeated that “I was a soldier, a normal soldier and whatever I did, I did because it was an order from my colonel”. The reporter had asked him again “ you said that you killed a 19 year old prisoner, right?” and Olgkats  confirmed again. “Yes, correct“. He was further asked who was the colonel who gave the order, at which Olgkats simply answered that he couldn’t remember. He was also asked if there were anymore prisoners which were killed in the same way, but yet again the Turkish actor answered that he didn’t know. “ I don’t know, we were 40 thousand people there, I only told of the small incident that had happened to me”.

The article above has been translated from the POLITIS newspaper. (Article here)

Update : Video Found containing snippets of his confession. This was broadcast on Cyprus’ and Greece’ Television stations.

Dialogue from the Interview Scenes:
Atila : Sure, I killed 10 people.
Hosts : You killed ten people?
Atila : Yes.
When I returned back (to Turkey) I didn’t meat for ages. because I kept seeing bodies, bodies that stank. In the heat the bodies I persecuted had started to smell, under the very high temperatures.
Hosts : When you killed for the first time what did you feel?
Atila : In the beginning I cried but afterwards I got used to it.
Hosts : Did you come face to face with someone?
Atila : Yes
He spat in my face. He was tied-up.  My superior told me to kill him, and he left. From a distance I pulled my gun on him and I killed him. He was a 19 year old kid.
Hosts : Was this young man armed?
Atila : No he was tied-up… he was a prisoner.
Hosts : Did you see him again in your dreams?
Atila : Yes. I’m an artist and human as well.