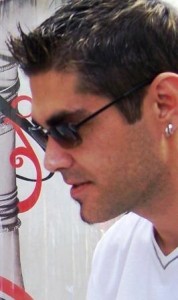 DJ Melonic (born in Cyprus) had his first taste of music was when he was 4 years old, playing with a jukebox in his father’s cafe.

Later, at the age of 14, Melonic got his first synthesizer & started mixing his tunes for school parties. His first residency was in Limassol’s Tourist Area’s Mylos Club (at the age of 17) back in 1993. This is where he got his first taste of house music. In 1998 he tasted the atmosphere at an underground event for the first time & since then he has dedicated his music style to those of underground progressive beats.

Dj Melonic has been the leading resident & guest DJ for many clubs, bars & events around Cyprus & abroad, playing with some of the best names of electronic music scene like Marco V, Mauro Picotto, Eddie Halliwell, Andy Moor, Chris Lake, Nikki Belucci & many others including  the best local DJ’s of the like of Andrewz Vee, Kn, PM, Aleka & many more. He has also performed his progressive sounds in others countries like Serbia Lebanon & Holland.

In 2004 he create his own label under the name MLC, where he released his remixes. Last year he created the promotion company PSYSHIKA, from where he is organizing events with guest DJ’s all over the world.

DJ Melonic now only performs for special events & is continually trying to promote only the best tunes from underground music scene.

Have a listen to an exclusive set available to readers of OnThisIsland.com by DJ Melonic :

Keep Checking back for more exclusive sets/streams from other local DJ’s including Anthony Scott, Mario Chris, DJ Blend, Miss Scarlet and others…

Here’s some photos of DJ Melonic :