Cyprus has always been exposed to dance music through the influence of its tourist industry and the many Cypriots that live abroad, bringing new sounds back to the island every time they visit.

In the last 15 years we’ve seen everything from Ayia Napa’s UK Garage craze of the early 2000’s, through to sun drenched Trance / Big room House sessions at the infamous Guaba Beach Bar in Limassol, to the dark and Minimal Techno sound of Nicosia’s seminal KlubD.

Come 2012 and one can’t have failed to notice that the tide was turning once again, this time toward the more subliminal Deep House sound emanating from London and Berlin’s after-hour clubs.

At the forefront of this new movement, we find 3 friends who have combined their strength and passion for quality House music and parties in order to create something the island had yet to see – Meet LOST Promotions consisting of Peter Leontiades, Markus Eden and Michel Fialas, the latter two being well known DJ’s on the island-wide circuit for years.

Having staged two sold out boat parties in the summer of 2012 that had people talking for months afterwards, one has to look a little deeper to see where the small but decisive differences lie that make a LOST party so special.

To sum it up in a nutshell, “attention to detail” probably describes it best! Where a lot of parties on the island all seem to adhere to the same bog standard recipe, LOST deviates from the norm.

To start off with, the DJ’s that play at LOST events are not the go safe big name hot shots that are guaranteed to attract the masses but rather represent the more underground, up and coming side of the spectrum.

“We want to educate people musically. Get them to listen to something NEW rather than offering them what everyone else has been offering them for years” says Markus Eden. “You can see the demand IS there as a lot of bars and clubs on the island have been shifting their sound toward the more housey side of things lately” adds Michel Fialas.

“I believe spending the time and effort in doing something you love gives our parties that extra edge, the music and the creative stuff go hand in hand for me” says Peter Leontiades, and it is in fact evident that these guys are not in it for the money, they just want to put on a party that they themselves would love to go to.

This, coupled with interesting decoration, friendly staff and the fact that LOST focuses on day parties seems to be working, as last year they saw excellent reactions from not only the crowd but the DJ’s as well! Alexis Raphael and HNQO, both of the well-known Hot Creations imprint, pledged to be back as soon as possible to once again entertain the Cyprus ravers

As the summer draws ever nearer LOST’s first event for 2013 has now been announced. The 1st of May (Labour Day) will see Brazil’s HNQO return to the island for his second party with LOST after having been received so well the first time round. 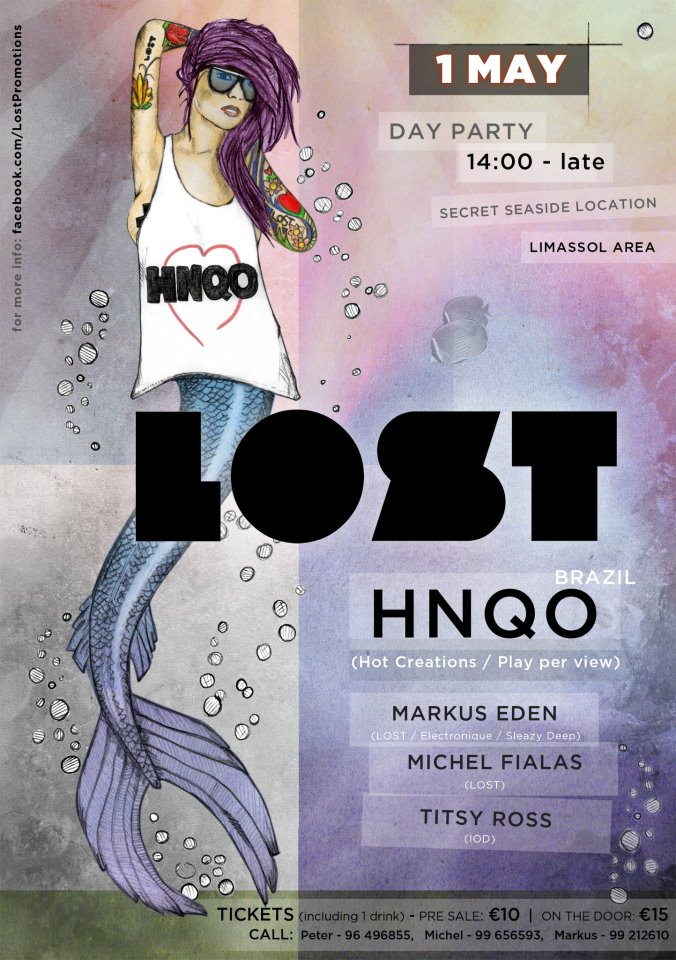 “My last tour was really great and one of the places I liked best was Cyprus/Limassol – The LOST party we had last summer was great fun and the crowd attending the boat were just too cool, party people, beautiful girls lying in the sun and now I’m so looking forward to be back and catch that friendly atmosphere again” is what HNQO had to say about last summer’s gig. This ever humble artist went from being one of the up-and-coming DJs last year, to topping Beatport charts for weeks with ‘Point of View” and other major tracks, all the way to playing at some of the biggest international parties around the globe – Jamie Jones’ Paradise at BPM Festival in Mexico to name but one.

He will be joined on the decks by IOD’s Titsy Ross (KlubD) as well as local DJ and producer Markus Eden and LOST resident Michel Fialas playing back to back!