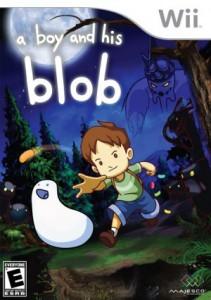 Once again this is the week’s games release list with the more notable titles highlighted. As you can see it’s a pretty strong line-up across all the three four major platforms.

Ratchet & Clank: A Crack in Time on the PS3, one of my favourite platform series, validates the general feeling that the PS3 has the better line-up this holiday season compared to the 360 and of course the Wii. (Eurogamer review 7/10)

Dragon Age: Origins on the 360 and PC is a RPG from the legendary developers Bioware ticks all the right boxes and should provide another solid experience to traditional RPG fans.(Eurogamer review 8/10)

Finally, a Wii game worth mentioning after a very long time. A Boy And His Blob which is actually game of the week.

“It’s a game that invites you to wallow in its languid depths, wriggle your toes, stretch your brain a little and take in the view. So satisfying and immersive is this distinctive experience that even some rather ill-advised boss battles can’t ruin the autumnal ambience. Gently challenging without being frustrating, and quietly ingenious in its construction, A Boy and His Blob is one of the Wii’s sweetest surprises.”