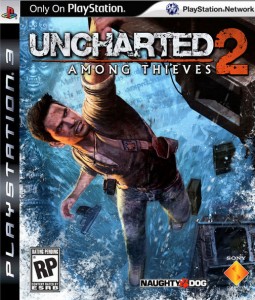 Only two titles worth talking about this week. The first is Brutal Legend which involves the iconic figure of Tim Schafer, the writer behind Monkey Island and Grim Fandango. It also involves the actor/musician Jack Black who voices the game’s lead character. If you are a fan of rock music and/or the guys involved in this you should consider it a must buy at some point if not right now.

“Brutal Legend is a fun romp through the outrageous culture of heavy metal, and its variety of gameplay styles and accessible characters and art make it fun for just about anyone. Plus, if you’ve never yet been exposed to the creepy/funny/touching work of Tim Schafer, this game is as good a place as any to start.”

The second title and game of the week is a PS3 exclusive, Uncharted 2: Among Thieves. Sony has always claimed that the PS3 is a vastly superior console to the 360 but it has only been able to show this with exclusive titles. Uncharted 2 is a case in point. It is simply stunning.

“…at the core of Uncharted 2 is an action-adventure masterpiece…

By the end of Uncharted 2 though, Drake has found his place in the world, and so has the developer – among giants”