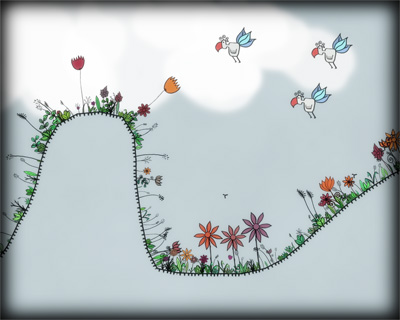 After watching all those trailers and new controller demonstrations we are back to the present which is not as sweet. We would all like to get Splinter Cell: Conviction or Uncharted 2 but we will have to make do with the likes of Prototype (360, PC) and Grand Slam Tennis (Wii) instead.

Here’s the Protorype (another open world game in the mould of Crackdown and InFamous) review on Eurogamer.

“Prototype is a game of riotous, gore-splattering ultraviolence. That’s all it wants to be, and in many respects it does a solid, and often spectacular job. The victims may be plot, atmosphere and the difficulty curve, but then great power always comes at a cost.”

But Prototype is not the game of the week.

The honours go to the PC indie game that goes by the name of Blueberry Garden. An award winning game that one can get through Steam and there is also a demo to try out. But for US$5 do yourself a favour and just get the damn thing. What’s 2 pints of KEO less this weekend. It will be good for your diet. The game was developed by Erik Svedang and here’s a link to the official site. Link

A short review at Greenpixels will explain to you what this game is all about and this is a short trailer of the game.

The gorgeous Blueberry Garden is game of the week.

Hail To The Chimp
Rock Revolution

Indiana Jones And The Staff Of Kings