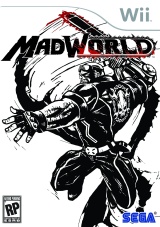 Nintendo’s Wii has been associated, and rightly so, with kiddy looking party games such as Wii Sports. Titles released on the Wii which can be considered as appealing to hardcore gamers are very few indeed. Even those few are pretty much cartoony looking e.g. Super Mario Galaxy and Smash Bros. Apart from the absolutely dreadful Manhunt 2 and the excellent House of the Dead: Overkill I don’t think there are any other notable games with mature content out there.

But in 2008 the first screenshots and trailers of MadWorld were released and I was blown away by the art style of the game. A black and white visual style, with red being the only other colour. It brings to mind Sin City both dye to its visual style but also because of the violence. The game is incredibly gory with acts like breaking bodies in half, driving road signs into other character’s heads being just a small taste of what the game is all about.

The Wii’s hardware capabilities are considerably more limited than those of the 360 and PS3. Developers should start experimenting with different visual art styles which can compensate for these limitations. PlatinumGames, the developers of MadWorld, have clearly shown that it can be done.

Mad World is my mature game of the week.

Similar to MadWorld invading the world of kiddy gaming is Grand Theft Auto: Chinatown Wars‘ release on Nintendo’s other console, the DS. With the DS’ installed base expect this one to be another huge seller for Rockstar.

In other news, Sony recently admitted that it had neglected its handheld console, the PSP, in 2008 and that it would fix that in 2009 by releasing high quality games. Resistance: Retribution is one of those games. If you own a PSP and haven’t switched it on recently, now might be a good time to do so.