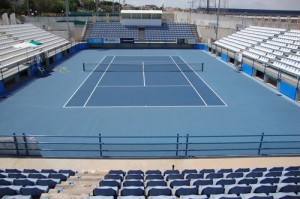 The Cyprus Tennis Federation proudly announces that the Group II tie between Cyprus and Ireland, will take place at the National Tennis Centre in Nicosia between the 10th and 12th of July 2009. Our team will be led by Davis Cup captain and National Team coach, Yiannos Hadjigeorgiou, and our No. 1 and No. 2 tennis players, Marcos Baghdatis and Photos Kallias, will participate in the start-up singles lineup.